Do you want Search?
Spread the love

Dark and mysterious, Tahitian pearls have always enjoyed a very special place in the kingdom of pearls. They are produced by the Pinctada Margaritifera or Black-lip pearl oyster, and have a very distinctive color. While black is the most common color associated with this exotic variety, Tahitian pearls can actually come in a wide range of hues – from creamy white and pale grey to regal green, iridescent peacock spectrum and of course, deep black. Their popularity is largely attributed to the efforts of Mr. Robert Wan of Tahiti and his New York-based colleagues in the mid 1900’s. A major reason for the enthusiasm around these pearls is the fact that Tahitian pearls are naturally black in color (unlike black freshwater and black Akoya pearls, which are irradiated or dyed). They also come in other shades which are equally striking and innovative. Matching the color of a Tahitian pearl can be a Herculean task, requiring the accumulation of thousands of pearls to pick the right matches from. This perhaps lends a unique air of exclusivity to every strand made with them. 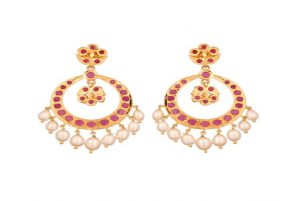 Another distinctive feature of Tahitian pearls is their size which can range from approximately 8 mm to 18 mm. Large Tahitian pearls are commercially harvested as South Sea pearls today. However, the size is not the only significant aspect of their appearance. Tahitian pearls owe much of their beauty to their incredible array of iridescent colors which cover, by and large, the entire rainbow spectrum.

All said, here’s a bit about the origin of their name. It is curious to note that although Tahitian Pearls carry the name of the famous Tahiti Island, they do not originate from Tahiti. Tahiti is the main trading post for atolls that produce Tahitian pearls. Black-lip pearls are farmed in French Polynesia, the Cook Islands, the Micronesian Islands, and even to some extent, in Japan, Thailand and the Philippines. However, only those that are grown in French Polynesia can be rightfully called Tahitian pearls.

So if you are feeling sufficiently tempted to own your very own Tahitian pearl jewelry, it’s time to take notice of the cost and be ready to purchase. Be warned though, Tahitian Pearls were once the rarest, most valuable cultured pearls in the world. Just to give you an idea, about a decade and a half ago, a perfect strand of Tahitian pearls for $100,000 would have been considered a bargain! In fact, they are still much more valuable than freshwater and Akoya pearls, but market forces have made them quite affordable in recent times and they are fast finding their way into the homes of a growing number of pearl lovers today.

Understanding the Difference between Freshwater and Cultured Pearls

What You Need to Know About Akoya Pearls Where to Buy Pearl Jewellery Online? Style Up Your Traditional Jewellery with Western Dresses!